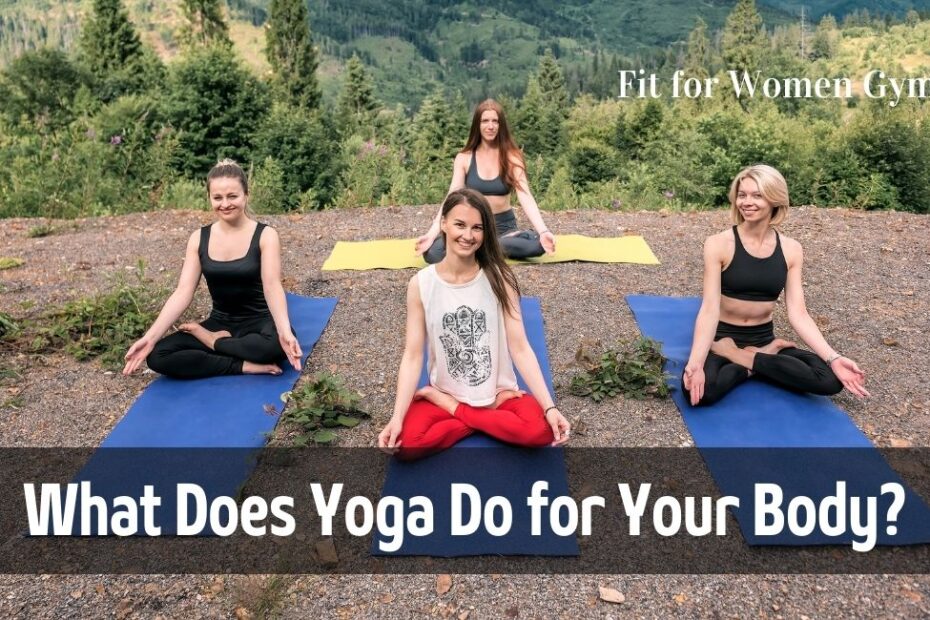 Home » What Does Yoga Do for Your Body?

What Does Yoga Do for Your Body?

The practice of yoga is an excellent approach to improve both your flexibility and your strength. It is not limited to those who are able to touch their toes or those who like to meditate; virtually anyone is capable of doing it.

The goal of many forms of yoga is to achieve a state of calm. In some of them, you will move about more. The majority place an emphasis on learning different positions, which are known as asanas. In addition to that, they typically involve paying attention to one’s respiration.

The gentle movements included in yoga are a significant contributor to the practice’s widespread appeal. People who haven’t been physically active in a while can benefit from participating in yoga.

People who suffer from certain health issues, such as osteoporosis or arthritis, can benefit from taking it.

You are free to adapt the workouts to meet your requirements. However, yoga is also fantastic if you are already fit and are looking for a strenuous form of exercise.

As your strength and flexibility improve as a result of practicing yoga, you will find it simpler to engage in other forms of exercise, such as dancing, walking, or swimming.

What Benefits Does Yoga Offer to the Body?

The scientific research into yoga’s advantages is still in its early stages, but the majority of the information accumulated to date seems to corroborate what yoga practitioners appear to have understood for millennia: Yoga is extremely good to our overall health and wellbeing.

Let’s take a more in-depth look at a few of the many benefits that yoga has to offer.

Strength, balance, and flexibility are all improved with yoga practice. Holding a position for an extended period of time can help improve strength, while slow movements and deep breathing help get the blood flowing and warm up the muscles.

People who suffer from lower back discomfort may find that practicing yoga, in addition to basic stretching, helps them feel less pain and improves their mobility. Yoga is one of the primary treatments that the American College of Physicians suggests for people who suffer from chronic low back pain.

The reduction of stress was by far the most common response when participants were asked why they practiced yoga. We can count ourselves fortunate that yoga, and particularly asana, has been shown to be effective in lowering stress levels.

However, keep in mind that the physical practice is merely one component of yoga. It has been demonstrated that practicing meditation, working with one’s breath, and engaging in auditory rituals such as chanting and sound baths can considerably lower tension and alleviate stress.

According to the findings of a recent study, those who practiced yoga for at least thirty minutes once a week for a minimum of four years had a lower risk of gaining weight during their middle adult years.

People who were previously overweight were actually able to reduce their weight. When compared with individuals who did not practice yoga, people who practised yoga had lower body mass indices (BMIs) overall.

According to the researchers, this was due to practicing mindfulness. Eating with awareness can result in a more satisfying and satisfying connection with food and eating.

Yoga has been shown to have a beneficial effect on cardiovascular risk factors, including helping persons with hypertension lower their blood pressure. These findings come from a number of smaller research.

There is a good chance that practicing yoga will restore “baroreceptor sensitivity.” Because of this, the body is better able to detect irregularities in blood pressure and to maintain equilibrium.

According to the findings of another study, practicing yoga can enhance lipid profiles in patients who are healthy as well as patients who are already diagnosed with coronary artery disease.

In those with diabetes who did not require insulin, it not only lowered their high blood sugar levels, but it also reduced the amount of medication they required.

Because of the positive effects that yoga has on both the cardiovascular system and on alleviating stress, it is increasingly being incorporated into cardiac rehabilitation programs.

Practicing yoga on a consistent basis can help cultivate friendliness, compassion, and a higher capacity for equanimity.

This may help enhance many of your relationships, particularly when combined with the yogic philosophy’s emphasis on not causing harm to other people, stating the truth, and taking only what you require.

You need focus to get your body into the pose, and you need endurance to keep it there for that predetermined amount of time. In order to hold a yoga pose correctly, you need a mix of concentration and endurance.

This combination not only improves your performance in yoga, but it also makes it easier for you to maintain mental focus when dealing with other stressful situations in your day-to-day life.

Even though the research is still in its infancy (particularly when compared to the length of time that individuals have been doing yoga), the results are encouraging and validate what yoga practitioners have been proclaiming for thousands of years: Yoga is good for our general health.

The term “yoga” refers to a collection of activities, the vast majority of which do not include any kind of physical activity but rather concentrate on various meditative strategies.

Even doing good deeds for others, such as karmic or charitable work, can count as yoga.

Because it does not consist solely of physical activity, yoga is a practice that may be done on a daily basis.

Find the approach to yoga that works best for you, and keep in mind that the time and money you spend on your practice are investments in you.