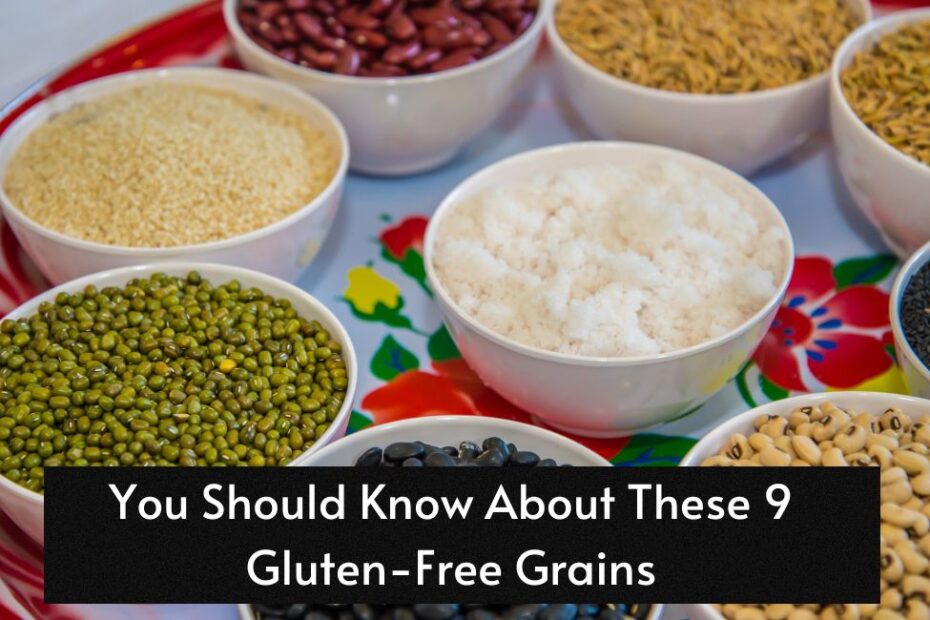 Home » You Should Know About These 9 Gluten-Free Grains

You Should Know About These 9 Gluten-Free Grains

If you’re looking for a gluten-free grain, look no further. Here’s a list of gluten-free whole grains to pick from.

Many individuals rely on gluten-free grains as cupboard staples. People with celiac disease (an autoimmune illness that damages the intestines), gluten intolerance, or a wheat allergy fall into this category. They can also provide certain health and culinary benefits to the general public (but not in every case). What you need to know about gluten-free grains is outlined here.

Grain sources that are gluten-free

Gluten-free grains and grain-based meals are far easier to get now than they have ever been before, thanks to their growing popularity and continued culinary innovation.

Is it possible to find gluten-free whole grains?

You’ve come to the right place. All grains, even gluten-free grains, start off as whole grains. When avoiding gluten, choose foods that contain whole-grain versions of rice, corn, sorghum, and other grains, as well as whole-grain flours.

Because you’ll be getting both portions of the grain, including the fiber-rich bran and nutrient-rich germ, this is the healthiest option. To get all of the edible plant-based benefits from grains, strive for whole-grains like brown rice rather to processed, refined grains like white rice the majority of the time.

Grain and pseudo-cereals that are gluten-free (seeds)

Use the list below as a quick reference guide to gluten-free whole grains and pseudo-cereals.

Brown rice is a gluten-free grain that is high in antioxidants, B vitamins, and magnesium. Short-grain (stickier) and long-grain (fluffier) versions are available. Brown rice takes a little longer to cook than white rice, but it has a chewier texture and a nuttier flavor.

Whole-grain rice comes in a variety of cool colors, including red, purple, and black, which contain more bioactive chemicals. Use these whole-grain rice variations as a healthier alternative to white rice for added nutrition and flavor.

This little, misunderstood “whole-grain” is jam-packed with nutrients. A cup of cooked amaranth contains 9 grams of protein, 5 grams of fiber, and minerals such as iron, potassium, and calcium. While amaranth is classed as a pseudo-cereal, it is commonly consumed as a grain in hot cereals such as oatmeal or porridge.

Buckwheat with the whole grain

Another pseudo-cereal is buckwheat. It can help you get more protein, fiber, magnesium, and potassium in your diet. And in a nutty, meaty, and earthy kind of way.

It’ll be the star of buckwheat crepes or pancakes when ground into flour. When dining out, keep in mind that it’s occasionally blended with all-purpose (wheat) flour to lighten the texture and tone. Buckwheat is also available as soba noodles and groats (kasha).

Corn with all of the grains

Maize could be transformed into cozy cornmeal (also known as polenta) or hominy (an alkali-treated dry corn) dishes instead of being eaten as a vegetable.

The eye-protective lutein and zeaxanthin included in yellow cornmeal make it a nutritional highlight. Polenta can be eaten as a hot porridge or as crispy fries after cooked (yum). Corn can also be processed and used to make corn tortillas and chips.

Millet can be pecked by birds. But it’s also a gluten-free seed worth including in your diet, thanks to its high levels of protein, magnesium, phosphorus, and heart-protective antioxidants. Furthermore, according to a review published in Frontiers in Nutrition, eating millet on a regular basis may help lower blood glucose and the risk of developing diabetes.

Millet has a mild flavor and is best when seasoned and flavored. It’s also delicious when you toast it before using it in a recipe, which adds a nuttiness to it. Breads and fast breads benefit from the seeds’ texture. Millet flour is also a terrific addition to homemade bread.

Quinoa is a seed that contains both plant protein and dietary fiber, making it extremely filling. If you need a good dose of iron or anti-inflammatory antioxidants, this is the place to go. Choose from a variety of colors, including white, red, and black, which have a heartier flavor. It’s great as a side dish or a key ingredient in stuffings, salads, and desserts.

Sorghum is a nutty, chewy ancient grain with a lot to brag about. It’s high in protein, fiber, and potassium, as well as plant sterols that may help decrease cholesterol. Sorghum is also healthy for the environment, especially because it is primarily rain-fed rather than irrigation-fed.

Teff is a tiny seed that’s packed with minerals including iron, calcium, magnesium, and zinc. There are many different sorts and tints, but the most common is a reddish-brown variety with a strong flavor and a hint of earthy sweetness.

Fonio is a nutty, earthy grain from West Africa that has only lately become available in the United States. Its most prominent nutrient is iron. It has the appearance of couscous and cooks in the same amount of time. Serve as a couscous-style side dish or salad, as well as in grain bowls, veggie burgers, and other dishes.